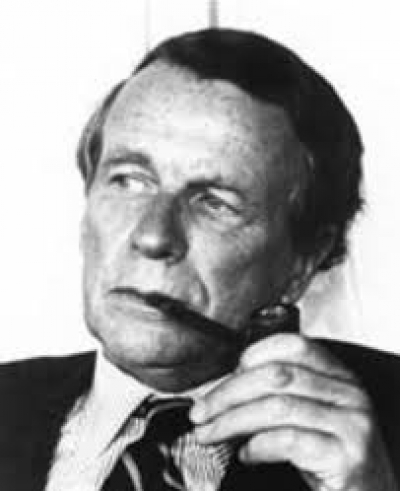 David Mackenzie Ogilvy (23 June 1911 – 21 July 1999), CBE, was an advertising executive who was widely hailed as "The Father of Advertising". In 1962, Time called him "the most sought-after wizard in today's advertising industry".

David Mackenzie Ogilvy was born on 23 June 1911 at West Horsley, Surrey in England. His mother, Dorothy Blow Fairfield, was Anglo-Irish. His father, Francis John Longley Ogilvy (c. 1867 - 1943) was a Gaelic-speaking Highlander from Scotland who was a classics scholar and a financial BROKER. Ogilvy attended St Cyprian's School, Eastbourne, on reduced fees because of his father's straitened circumstances and won a scholarship at age thirteen to Fettes College, in Edinburgh. In 1929, he again won a scholarship, this time in History to Christ Church, Oxford.

Without the scholarships, Ogilvy would not have been able to attend Fettes or Oxford University because his father's BUSINESS was badly hit by the depression of the mid-1920s. His studies were not successful, however, and he left Oxford for Paris in 1931 where he became an apprentice chef in the Hotel Majestic. After a year, he returned to Scotland and started selling AGA cooking stoves, door-to-door. His success at this marked him out to his employer, who asked him to write an instruction manual, The Theory and Practice of Selling the AGA Cooker, for the other salesmen. Thirty years later, Fortune magazine editors called it the finest sales instruction manual ever written.

After seeing the manual, Ogilvy's older brother Francis Ogilvy—the father of actor Ian Ogilvy—showed the manual to management at the London advertising agency Mather & Crowther where he was working. They offered the younger Ogilvy a position as an account executive.

In 1938, Ogilvy persuaded his agency to send him to the United States for a year, where he went to work for George Gallup's Audience Research Institute in New Jersey. Ogilvy cites Gallup as one of the major influences on his thinking, emphasizing meticulous research methods and adherence to reality.

During World War II, Ogilvy worked for the British Intelligence Service at the British embassy in Washington, DC. There he analyzed and made recommendations on matters of diplomacy and security. According to a biography produced by Ogilvy & Mather, "he extrapolated his knowledge of human behaviour from consumerism to nationalism in a report which suggested 'applying the Gallup technique to fields of secret intelligence.'" Eisenhower’s Psychological Warfare Board picked up the report and successfully put Ogilvy’s suggestions to work in Europe during the last year of the war.

Also during World War II David Ogilvy was a notable alumnus of the secret Camp X, located near the towns of Whitby and Oshawa in Ontario, Canada. According to an article on the: "It was there he mastered the power of propaganda before becoming king of Madison Avenue. Although Ogilvy was trained in sabotage and close combat, he was ultimately tasked with projects that included successfully ruining the reputation of businessmen who were supplying the Nazis with industrial materials." http://www.cbc.ca/xcompany/m/dispatches/the-real-camp-x-10-facts-about-canadas-elite-spy-school

After the war, Ogilvy bought a farm in Lancaster County, Pennsylvania and lived among the Amish. The atmosphere of "serenity, abundance, and contentment" kept Ogilvy and his wife in Pennsylvania for several years, but eventually he admitted his limitations as a farmer and moved to Manhattan.

Having worked as a chef, researcher, and farmer, Ogilvy now started his own advertising agency with the backing of Mather and Crowther, the London agency being run by his elder brother, Francis, which later acquired another London agency, S.H. Benson. The new agency in New York was called Ogilvy, Benson, and Mather. David Ogilvy had just $6,000 in his account when he started the agency. He writes in Confessions of an Advertising Man that, initially, he struggled to get clients. Ogilvy also admitted (referring to the pioneer of British advertising Bobby Bevan, the chairman of Benson): "I was in awe of him but Bevan never took notice of me!" They would meet later, however.

Ogilvy & Mather was built on David Ogilvy's principles; in particular, that the function of advertising is to sell and that successful advertising for any product is based on information about its consumer. He disliked advertisements that had loud patronizing voices, and believed a customer should be treated as intelligent. In 1955, he coined the phrase, "The customer is not a moron, she's your wife" based on these values.

His entry into the company of giants started with several iconic advertising campaigns: former First Lady, Eleanor Roosevelt, did a commercial for Good Luck Margarine in 1959. In his autobiography, Ogilvy On Advertising, ad mogul David Ogilvy considered it a mistake to persuade her to do the ad – not because it was undignified, but because he grew to realize that putting celebs in ads is a mistake.

"The man in the Hathaway shirt" with his aristocratic eye patch which used George Wrangel as model; "The man from Schweppes is here" introduced Commander

Edward Whitehead, the elegant bearded Brit, bringing Schweppes (and "Schweppervescence") to the U.S.; a famous headline in the automobile BUSINESS, "At 60 miles an hour the loudest noise in this new Rolls-Royce comes from the electric clock"; "Pablo Casals is coming home – to Puerto Rico", a campaign which Ogilvy said helped change the image of a country, and was his proudest achievement.

One of his greatest successes was "Only Dove is one-quarter moisturizing cream". This campaign helped Dove become the top selling soap in the U.S.

Ogilvy believed that the best way to get new clients was to do notable work for his existing clients. Success in his early campaigns helped Ogilvy get big clients such as Rolls-Royce and Shell. New clients followed and Ogilvy's company grew quickly.

In 1973, Ogilvy retired as Chairman of Ogilvy & Mather and moved to Touffou, his estate in France. While no longer involved in the agency's day-to-day operations, he stayed in touch with the company. His correspondence so dramatically increased the volume of mail handled in the nearby town of Bonnes that the post office was reclassified at a higher status and the postmaster's salary raised.

Ogilvy came out of retirement in the 1980s to serve as chairman of Ogilvy, Benson, & Mather in India. He also spent a year acting as temporary chairman of the agency’s German office, commuting weekly between Touffou and Frankfurt. He visited branches of the company around the world, and continued to represent Ogilvy & Mather at gatherings of clients and BUSINESS audiences.

In 1989, The Ogilvy Group was bought by WPP Group, a British parent company, for US$864 million in a hostile takeover made possible by the fact that the company group had made an IPO as the first company in marketing to do so.

During the takeover procedures, Sir Martin Sorrell, the founder of WPP, who already had a tarnished reputation in the advertising industry following a similar successful takeover of J. Walter Thompson, was described by Ogilvy as an "odious little shit", and he promised to never work again. (Reports softened it to "odious little jerk", and when Martin Sorrell signed his next company report, he followed the signature with the letters OLJ.) Two events followed simultaneously, however: WPP became the largest marketing communications firm in the world, and David Ogilvy was named the company's non-executive chairman (a position he held for three years). Eventually he became a fan of Sorrell. A letter of apology from Ogilvy adorns Sorrell's office, which is said to be the only apology David Ogilvy ever offered in any form during his adult life. Only a year after his derogatory comments about Sorrell, he was quoted as saying, 'When he tried to take over our company, I would liked to have killed him. But it was not legal. I wish I had known him 40 years ago. I like him enormously now.'

At age seventy-five, Ogilvy was asked if anything he'd always wanted had somehow eluded him. His reply was, "Knighthood. And a big family - ten children." His only child, David Fairfield Ogilvy, was born during his first marriage, to Melinda Street. That marriage ended in divorce (1955) as did a second marriage to Anne Cabot. Ogilvy married Herta Lans in France during 1973.

He didn’t achieve knighthood, but he was made a Commander of the Order of British Empire (CBE) in 1967. He was elected to the U.S. Advertising Hall of Fame in 1977 and to France's Order of Arts and Letters in 1990. He chaired the Public Participation Committee for Lincoln Center in Manhattan and served as a member of the Metropolitan Museum of Art’s 100th Anniversary Committee. He was appointed Chairman of the United Negro College Fund in 1968, and trustee on the Executive Council of the World Wildlife Fund in 1975. Mr. Ogilvy was inducted into the Junior Achievement U.S. BUSINESS Hall of Fame in 1979.

David Ogilvy died on 21 July 1999 at his home, the Château de Touffou, in Bonnes, France. Ogilvy remains one of the most famous names in advertising and is considered one of its dominant thinkers.

David Ogilvy: We Sell or Else

David Ogilvy The View From Touffou

A conversation about advertising, with David Ogilvy

David Ogilvy interviewed by John Crichton in 1977. Ogilvy is the God Father of advertising.
More in this category: « Wroe Alderson Guy Kawasaki »
back to top