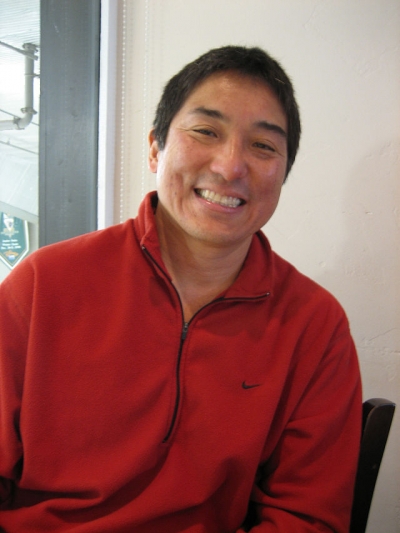 Guy Kawasaki was born in Honolulu, Hawaii, where he attended Iolani School. He cites his AP English teacher Harold Keables as a major influence, who taught him that "the key to writing is editing." He graduated with B.A. in psychology from Stanford University in 1976. After Stanford he went to law school at UC Davis, for two weeks before realizing that he hated law school. In 1977, he enrolled in the UCLA Anderson School of Management, from where he received his MBA. His first job was at a jewelry company, Nova Stylings; in regard to this, Kawasaki said, "The jewelry BUSINESS is a very, very tough business—tougher than the computer business... I learned a very valuable lesson: how to sell."

In 1983, Kawasaki got a job at Apple through his Stanford roommate, Mike Boich. He was Apple's chief evangelist for four years. In a 2006 podcast interview on the online site Venture Voice, Kawasaki said, "What got me to leave is basically I started listening to my own hype, and I wanted to start a software company and really make big bucks." In 1987 he was hired to lead ACIUS, the U.S. subsidiary of France-based ACI, which published an Apple database software system called 4th Dimension.

Kawasaki left ACIUS in 1989 to further his writing and speaking career. In the early 1990s he wrote columns that were featured in Forbes and MacUser. He also founded another company, Fog City Software, which created Emailer, an email client that sold to Claris.

He returned to Apple as an Apple Fellow in 1995. In 1998 he was a co-founder of Garage Technology Ventures, a venture capital firm that has made INVESTMENTS in Pandora Radio, Tripwire, The Motley Fool and D.light Design. In 2007, he founded Truemors, a free-flow rumor mill, that sold to NowPublic. He is also a founder at Alltop, an online magazine rack.

In March 2013 Kawasaki announced he would be joining Google as an advisor to Motorola. His role was to create a Google+ mobile device community.

In April 2014 Kawasaki became the chief evangelist of Canva. It is a free graphic-design website, for non-designers as well as professionals, founded in 2012.

On March 24, 2015, the Wikimedia Foundation announced Kawasaki had joined the foundation's board of trustees.

Guy Kawasaki at TEDxBerkeley 2014: "Rethink. Redefine. Recreate." His talk is titled "The Art of Innovation." https://youtu.be/W6cBEbFZuAk

Marketing these days is strategic and holistic and involves a whole lot of genuine social media engagement. Renowned venture capitalist Kawasaki is famous for helping to create Apple product evangelism and for his legendary marketing methods. He explains how to develop the highest level of relations with customers, employees and colleagues by affecting their hearts, minds and actions. - The Commonwealth Club of California

Guy Kawasaki Part 1: Why You Don't Need a Business Plan |

Guy Kawasaki is the author of APE, What the Plus!, Enchantment, and nine other books. He is also the co-founder of Alltop.com, an "online magazine rack" of popular topics on the web. Previously, he was the chief evangelist of Apple. Kawasaki has a BA from Stanford University and an MBA from UCLA as well as an honorary doctorate from Babson College.

Guy Kawasaki "The Art of the Start"

Guy Kawasaki presents The Art of the Start at TiECon, May 13, 2006."
More in this category: « David Ogilvy Theodore Levitt »
back to top