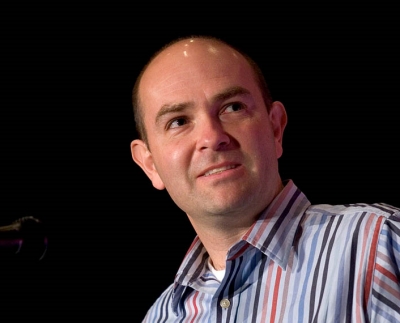 Chris Anderson (born July 9, 1961 in London, United Kingdom) is a British-American author and entrepreneur. He was with The Economist for seven years before joining WIRED magazine in 2001, where he was the editor-in-chief until 2012. He is known for his 2004 article entitled The Long Tail; which he later expanded into the 2006 BOOK, The Long Tail: Why the Future of BUSINESS Is Selling Less of More.He is currently the cofounder and CEO of 3D Robotics, a drone manufacturing company.

Anderson was born in London. His family moved to the United States, when he was five. He enrolled for a degree program in physics from George Washington University and went on to study quantum mechanics and science journalism at the University of California, Berkeley. He later did research at Los Alamos National Laboratory.

He began his career with a six year period as editor at the two scientific journals, Nature and Science. He then joined The Economist in 1994, where he remained for seven years, during which time he was stationed in London, Hong Kong and New York in various positions, ranging from Technology Editor to US Business Editor. He took over as editor of WIRED in 2001.

His 2004 article The Long Tail in WIRED was expanded into a book in 2006, titled, The Long Tail: Why the Future of Business Is Selling Less of More. It appeared on the New York Times Nonfiction Best Sellers list. The book argues that products in low demand or that have a low sales volume can collectively build a better market SHARE than its rivals, or exceed the relatively few current bestsellers and blockbusters, provided the store or distribution channel is large enough.

His next BOOK, entitled Free: The Future of a Radical Price (2009) examines the advantages of a strategy where products and services are initially given to customers for FREE, and how businesses can profit more in the long run. Anderson was accused of plagiarizing content from Wikipedia for his book. Anderson responded that he had disagreements with the criticism, and reasoned that the mention of citations were avoided due to the changing nature of content in Wikipedia. However, the whole episode led him to integrate footnotes into the text, and the digital editions of Free were corrected with the revision. Free debuted as #12 on the New York Times Best Seller LIST. It was also available as a free DOWNLOAD for a limited time, and an estimated 200,000 to 300,000 digital copies were DOWNLOADED in the first two weeks. The unabridged audiobook remains free.

Anderson's third book, Makers: The New Industrial Revolution (2012), was based on his 2010 article, "Atoms Are the New Bits". The book describes how entrepreneurs using open source design, and 3D printing as a platform for driving resurgence of American manufacturing. The ideas he portrayed; such as crowdsourcing of ideas, utilization of available lower-cost design and manufacturing tools, and reviewing options to outsource capital-intensive manufacturing were highlighted in the February 2012 Harvard Business Review article, "From Do It Yourself to Do It Together".

Anderson was featured and interviewed on The Amp Hour radio show in episode #105 - An Interview with Chris Anderson - Deambulatory Daedal Drones, where he discusses his career, books, and the hardware and drone industry.

In 2007, Anderson founded GeekDad, a do-it-yourself blog that later became part of Wired.com. He was the editor until the role was handed over to Ken Denmead, and he now serves as editor emeritus of GeekDad. The same year, Anderson founded Booktour.com, a free ONLINE service that connected authors on tour with audiences. In September 2011, Booktour.com folded.

In October 2007, Anderson, who has been described as an "aerial-reconnaissance enthusiast," flew a remote-controlled aircraft allegedly equipped with a camera over Lawrence Berkeley National Laboratory, causing security concerns when the aircraft crashed into a tree. The enthusiasm turned inspiration for co-founding 3D Robotics, a 2009 robotics manufacturing spin-off of the DIYdrones.com 3D Robotics produces the Ardupilot series of autopilots, which are based on the Arduino platform.

"Wired" editor and author Chris Anderson explains his theory of "The Long Tail," using the music and film industries as examples.

As part of the Google D.C. Talks series, Google's Washington office hosted a special book talk with Chris Anderson, Editor in Chief of Wired Magazine and best-selling author of "The Long Tail."

The New Media - Chris Anderson with Will Hearst

"Wired" editor and "The Long Tail" author Chris Anderson talks with publisher Will Hearst about how user-created content is changing the landscape of mass media.

World Maker Faire 2012: Chris Anderson & Bre Pettis "From Maker Movement to New Industrial Revolution" How big can the Maker Movement get? Can it really restart a manufacturing renaissance in America? Will desktop fabrication have as much impact as desktop computing did?

"The New Industrial Revolution": Chris Anderson, Editor-in-Chief of Wired Magazine, discusses a new form of entrepreneurship taking root around the world. People are applying the Web's social and innovation models to DIY "small batch" manufacturing, leading to what Mr. Anderson calls "the continuing industrialization of the Maker Movement".

Chris Anderson on the Democratisation of Manufacturing, Design and Technology

Making things for most of us means baking cakes or tinkering in the garden shed. Chris Anderson, renowned technology expert, American author of the bestsellers The Long Tail and Free and Editor-in-Chief of Wired magazine, came to Intelligence Squared to herald the third industrial revolution, in which high-tech do-it-yourself will become a part of everyday life.
More in this category: « Gary Hamel Michael Porter »
back to top