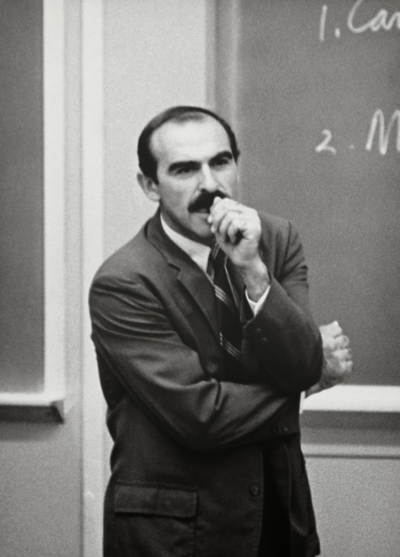 Theodore Levitt (March 1, 1925, Vollmerz, Main-Kinzig-Kreis, Germany – June 28, 2006, Belmont, Massachusetts) was an American economist and professor at Harvard Business School. He was also editor of the Harvard Business Review and an editor who was especially noted for increasing the Review's circulation and for popularizing the term globalization. In 1983, he proposed a definition for corporate purpose: Rather than merely making MONEY, it is to create and keep a customer.

Levitt was born in 1925 in Vollmerz. A decade later his family moved to Dayton, Ohio. He served in World War II, received his high school diploma through correspondence school and then earned a bachelor's at Antioch College and a Ph.D. in economics at Ohio State University. His first teaching job was at the University of North Dakota.

In 1959 he joined the faculty of the Harvard Business School. Later that year, he became world renowned after publishing Marketing Myopia in Harvard Business Review where he asks "What BUSINESS are you in?", a phrase that demands one account for the significance of the job one does.

He is widely credited with coining the term globalization through an article entitled "Globalization of Markets", which appeared in the May–June 1983 issue of Harvard Business Review. However, as a NYTimes article notes, the term 'globalization' was in use well before (at least as early as 1944) and had been used by economists as early as 1981. However, Levitt popularized the term and brought it into the mainstream BUSINESS audience. Between 1985 and 1989, he headed the Harvard BUSINESS Review as an editor.

He was the author of The Marketing Imagination, and was a best-selling author whose works have been translated into eleven languages. He was also the author of numerous articles on economic, political, management, and marketing subjects.

Professor Theodore Levitt who woke up the world of marketing with two seminal articles: Marketing Myopia (1960) and the Globalization of Markets (1983). In fact, he coined the term globalization of markets and years later they are still debating whether Levitt was right . https://youtu.be/h52W3D-tuf0

What Every Manager Needs to Know about Marketing - Levitt

Theodore Levitt discusses marketing. [Adapted (with permission) from The Humble Management Series, What Every Manager Needs to Know about Marketing, BNA Communications, Inc.] Gemmy Allen teaches at North Lake College. In this video, Levitt discusses marketing's relevance for the not-for-profit sector, the difference between marketing and selling, as well as other topics..
Altro in questa categoria: « Guy Kawasaki Hermann Simon »
Torna in alto