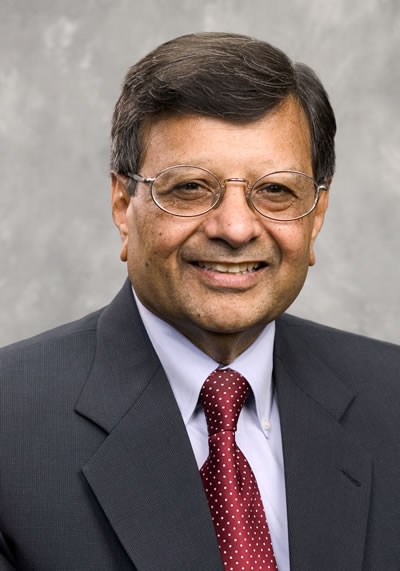 Jagdish N. Sheth (born 1938) is the Charles H. Kellstadt Professor of Marketing at the Goizueta Business School of Emory University. He is an internationally recognized business consultant whose client LIST includes AT&T, BellSouth, Ford, GE, Motorola, Square D, Whirlpool and Sprint. He also an educator, the winner of many awards and honors, and a member of the American Psychological Association. He is the founder of the Center for Relationship Management at Emory University and Center for Telecommunications Management at University of Southern California. He was a prominent member of the core TEAM during the initial years of Indian Institute of Management Calcutta, the first Indian Institute of Management.

In 2003, he founded the India, China & America Institute, a non-profit institute providing a sustainable, non-governmental platform to identify and drive synergies among India, China and America in the areas of emerging markets, commercial growth and alignment of policies for the benefit of a vast number of people.

Sheth was born in Burma (now Myanmar) in a Jain family, where his father had migrated from Western India to set up a business as a rice merchant . In 1941, the family emigrated as a refugees in wake of Japanese invasion of Burma to India. He received most of his schooling in Madras (now Chennai). It was here that he met his future wife, Madhuri Shah, at a local literacy society for high school students that he had founded.

Sheth came to the United States to further his academic career and received his MBA at the University of Pittsburgh in 1962.[3] He was fascinated by the psychological theories being advanced at that time and pursued a career in academia. During the mid-1960s he studied and researched at MIT, Columbia and the University of Pittsburgh, where he received his PhD in 1966 from its Katz Graduate School of Business. It was during this period that he STARTED developing his "Theory of Buyer Behavior." A book that he co-authored with his mentor Professor John Howard provided the foundation for the future of research in the field of consumer psychology and marketing.

Sheth has published more than 200 articles in leading journals and has written a number of books. His most recent book is The Accidental Scholar. Prior, he wrote Chindia Rising. His other significant books have been Tectonic Shift: The Geoeconomic Realignment of Globalizing Markets with Rajendra S. Sisodia, The Rule of Three: Surviving and Thriving in Competitive MARKETS, Clients for Life: How Great Professionals Develop Breakthrough Relationships, and Handbook of Relationship Marketing. In 2007, he published The Self-Destructive Habits of Good Companies.

Sheth is credited with being one of the leaders in marketing and one of the earliest to espouse the cause of Relationship Marketing. Besides Relationship marketing, he has published a number of seminal articles in the fields of consumer behavior, global marketing, information technology, and marketing strategy.

In addition to his academic research, teaching and consulting, Sheth contributes his time and financial resources to the COMMUNITY through various philanthropic foundations he has established. These include the "Madhuri and Jagdish Sheth Foundation" which focuses on building a strong community of academic marketers and developing the next generation of marketing academics, the "Sheth Family Foundation" which focuses on assisting the general Atlanta community in its various social, cultural, and religious activities, and contributions to Emory University to PROMOTE research and general understanding in the areas of religion, culture, BUSINESS, and other aspects of life in South Asia. Through his foundation, he has also established various Seth International Awards at Emory, the University of Illinois, and the University of Pittsburgh's University Center for International Studies.

He is also a founding chairman of the Academic Council of Mumbai Business School, a business School located in Mumbai, India.

Why 'Make in India' Makes Sense

The campaign focuses on creating jobs and attracting investments from corporations worldwide. Marketing professor Jagdish Sheth discusses the benefits of the initiative and how it can provide India with an alternative to global sourcing from China while modernizing the country’s supply chain.

In conversation with PING Network, Dr Jagdish Sheth,Charles H. Kellstadt Professor of Marketing at Emory University shares his views on the Indian IT industry. He also talks about the dependence and the challenges of the IT industry.

Dr. Sheth identifies five key demographics that will have significant impact on American culture and business in the coming decades.

Kellstadt Professor of Marketing at Goizueta Business School of Emory University, Sheth shares his thoughts on the proper role between government regulation and business in emerging economies, how the emergence of a robust middle class in India chang

In this video witth Dr. Sheth, we learn what characteristics are common in entrepreneurs and many of us will become "entrepreneurs by necessity."