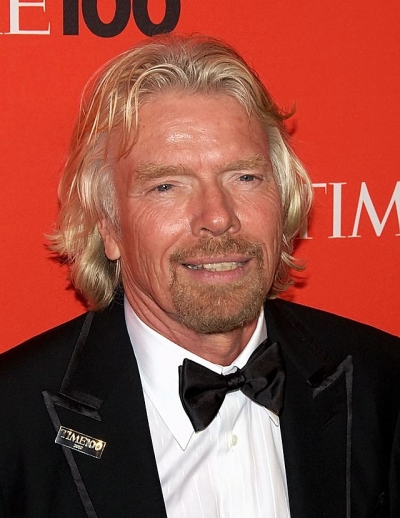 Sir Richard Charles Nicholas Branson (born 18 July 1950 in Blackheath, London, England, United Kingdom) is an English businessman and investor. He is best known as the founder of Virgin Group, which comprises more than 400 companies.

At the age of sixteen his first BUSINESS venture was a magazine called Student. In 1970, he set up a mail-order record business. In 1972, he opened a chain of record stores, Virgin Records, later known as Virgin Megastores. Branson's Virgin BRAND grew rapidly during the 1980s, as he set up Virgin Atlantic and expanded the Virgin Records MUSIC label.

According to the Forbes 2014 list of billionaires, Branson is the seventh richest citizen of the United Kingdom, with an estimated net worth of US$4.9 billion.

Branson was born in Blackheath, London, the eldest of three children born to barrister Edward James Branson (1918–2011), and Eve Branson (born 1924), a former ballet dancer and air hostess. Branson has two younger sisters. His grandfather, the Right Honourable Sir George Arthur Harwin Branson, was a judge of the High Court of Justice and a Privy Councillor. Branson was educated at Scaitcliffe School, a prep school in Berkshire, before briefly attending Cliff VIEW House School in Sussex. Branson attended Stowe School, an independent school in Buckinghamshire until the age of sixteen. Branson has dyslexia and had poor academic performance as a student, and on his last day at school, his headmaster, Robert Drayson, told him he would either end up in prison or become a millionaire.

Branson's parents were supportive of his endeavors from an early age.

Branson STARTED his record business from a church where he ran The Student magazine. Branson interviewed several prominent personalities of the late 1960s for the magazine including Mick Jagger and R. D. Laing. Branson advertised popular records in The Student and it was an overnight success. TRADING under the name "Virgin", he sold records for considerably less than the "High Street" outlets, especially the chain W. H. Smith. Branson once said, "There is no point in starting your own business unless you do it out of a sense of frustration." The name "Virgin" was suggested by one of Branson's early employees because they were all new at business. At the time, many products were sold under restrictive MARKETING agreements that limited discounting, despite efforts in the 1950s and 1960s to limit so-called resale price maintenance.

Branson eventually started a record shop in Oxford Street in London. In 1971, Branson was questioned in connection with the selling of records in Virgin stores that had been declared export stock. The matter was never brought before a court and Branson agreed to repay any unpaid tax and a fine. Branson's mother, Eve, re-mortgaged the family HOME to help pay the settlement.

The Manor Studio, Richard Branson's recording studio in the manor house at the village of Shipton-on-Cherwell in Oxfordshire.

Earning enough money from his record store, Branson in 1972 launched the record label Virgin Records with Nik Powell and bought a country estate north of Oxford, in which he INSTALLED a residential recording studio, The Manor Studio. He leased out studio time to fledgling artists, including multi-instrumentalist Mike Oldfield, whose debut album Tubular Bells (1973) was the first release for Virgin Records and became a chart-topping best-seller.

Virgin signed such controversial bands as the Sex Pistols, which other companies were reluctant to sign. It also won praise for exposing the public to such obscure avant-garde MUSIC as Faust and Can. Virgin Records also introduced Culture Club to the music world. In 1982, Virgin purchased the gay nightclub Heaven. In 1991, in a consortium with David Frost, Branson made an unsuccessful bid for three ITV franchisees under the CPV-TV name. The early 1980s also saw his only attempt as a producer—on the novelty record, "Baa, Baa, Black Sheep", by Singing Sheep in association with Doug McLean and Grace McDonald. The recording was a series of sheep baa-ing along to a drum-machine-produced track and reached number 42 in the UK charts in 1982.

In 1992, to keep his airline company afloat, Branson sold the Virgin label to EMI for £500 million. Branson said that he wept when the sale was completed because the record business had been the very start of the Virgin empire. In 1996 he created V2 Records to re-enter the music business, owning 5% himself.

Branson formed Virgin Atlantic Airways in 1984, launched Virgin Mobile in 1999, and Virgin Blue in Australia (now named Virgin Australia) in 2000. He was ninth in the Sunday Times Rich List 2006, worth slightly more than £3 billion. Branson wrote in his autobiography of the decision to START an airline:

My interest in life comes from setting myself huge, apparently unachievable challenges and trying to rise above them ... from the perspective of wanting to live life to the full, I felt that I had to attempt it.

My Virgin Records story - the documentary

Watch my Virgin Records story, from Mike Oldfield to The Rolling Stones, The Sex Pistols to Janet Jackson, this is the story of 40 years of Virgin Records. We got the original gang back together in London to revisit all of the people and places that made Virgin Records the greatest independent record label in the world. What's your favourite Virgin Records moment? Let us know.

Entrepreneurship, social issues, adventure, the environment and space travel are on the agenda at a Q&A session with Sir Richard Branson, Founder and Chairman of the Virgin Group.

Richard Branson is one of Britain's and the world's most successful entrepreneurs. His maverick style has taken him to extremes, not only in business but also in pleasure, making him a global brand.

Virgin Unite is the non-profit foundation of the Virgin Group. They unite people to tackle tough social and environmental problems in entrepreneurial ways. As the overheads of Virgin Unite are covered by Richard and the Virgin Group 100% of additional donations go to the front line where they are needed the most, for example, to support young entrepreneurs in South Africa, or homeless teenagers all over the world, or to stop young girls from suffering with fistula. I support Virgin Unite, please get on board and do the same at virginunite.com. Still need to be inspired? You can join Virgin Unite and Richard for their incredible leadership gatherings around the world.

Richard Branson on Marketing and Business

Richard Branson on Marketing and Business

Richard Branson on Marketing and Branding
More in this category: « Martin Lindstrom David Aaker »
back to top