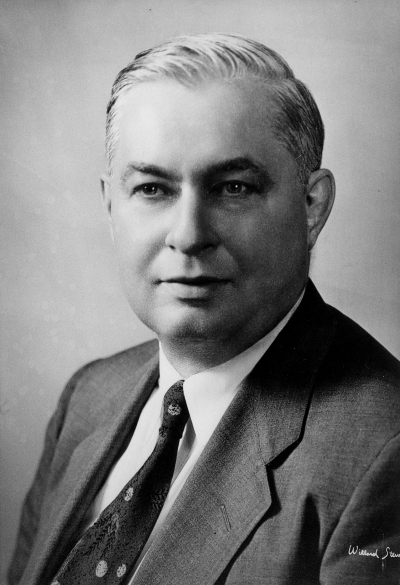 Wroe Alderson (1898 – 1965), an active Quaker, is widely recognized as the most important marketing theorist of the twentieth century and the "father of modern marketing".

Alderson’s academic training was at George Washington, MIT and the University of Pennsylvania. He served as president of the American Marketing Association and was highly active in The Institute of Management Sciences. He began his BUSINESS career at the U.S. department of Commerce, founded the internationally prominent marketing consulting firm of Alderson Associates, and served as a professor at Wharton University of Pennsylvania after joining it in 1959. While always deeply involved in the advancement of marketing science he also believed that theory and practice go hand in hand. This also suited his scientific method. From a methodological perspective, he emphasized inductive theorizing from market place events, providing a balanced to the neo-classical theories of firm behaviour. He also had the ability to communicate in the language of many disciplines and to bridge the BUSINESS and academic communities.

A significant element of his contribution to marketing thinking is his insistence upon an interdisciplinary approach, attracting the interest of scientists from other fields and borrowing from other disciplines such as psychology, philosophy and anthropology.

He argued that firms are ecological systems that grow and adapt to change; each seeks its own niche based on organised behaviour systems: "All marketing activity is an aspect of the interaction among organized behavior systems related to each other in what may be described as an ecological network. Operating systems are a subclass of behavior systems, distinguished by inputs and outputs and the structuring of processes to achieve efficiency."

"The functionalist approach is concerned with the functioning of systems, and the study of structure is essential to the analysis and interpretations of functions. Every phase of marketing can be understood as human behavior within the framework of some operating system. Survival and growth are implicit goals of every behavior system, including most particularly those that operate in the market place."

He also argued for heterogeneity of both supply and demand, introducing the ideas of market segmentation and niche marketing and the status of the brand. Increased product variety provides consumers with offerings nearer their ideal points. Firms can strive for differential advantage through product variety.

Amongst other accomplishments, he redefined the value-in-use concept as an alternative to the dominant value exchange theory, tracing it back through the ideas of Aristotle, Thomas Aquinas (the leading mediaeval theologian) and a variety of 17th, 18th and 19th century economists. Wroe Anderson also rejected the idea that different aspects of utility should be attributed to production and marketing Wroe Alderson established the Annual Marketing Theory seminars, founded the Management Science Center at the University of Pennsylvania, and received the Pabst Award in 1944, Hall of Fame in Distribution in 1953, the Charles Coolidge Parlin Award in 1954, and the Paul D. Converse Award in 1955.