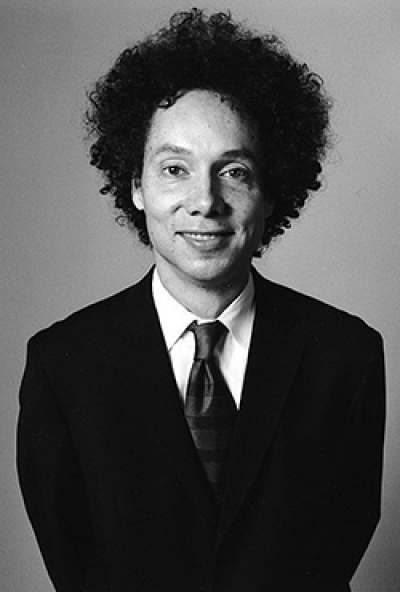 Malcolm T. Gladwell, CM (born September 3, 1963 in Fareham, Hampshire, United Kingdom) is a Canadian journalist, bestselling author, and speaker. He has been a staff writer for The New Yorker since 1996. He has written five books. All books were on The New York Times Best Seller list.

Gladwell's books and articles often DEAL with the unexpected implications of research in the social sciences and make frequent and extended use of academic work, particularly in the areas of sociology, psychology, and social psychology. Gladwell was appointed to the Order of Canada on June 30, 2011.

Gladwell's father noted that Malcolm was an unusually single-minded and ambitious boy. When Malcolm was 11, his father, who was a professor of mathematics and engineering at the University of Waterloo, allowed him to wander around the offices at his university, which stoked the boy's interest in reading and libraries.[9] During his high school years, Gladwell was a middle-distance runner and won the 1,500 meter title at the 1978 Ontario High School Championships in Kingston, Ontario with a time of 4:05.2 seconds. In the spring of 1982, Gladwell interned with the National Journalism Center in Washington, D.C. He graduated with a degree in history from Trinity College, University of Toronto in 1984.

Gladwell's grades were not good enough for graduate school (as Gladwell puts it, "college was not an... intellectually fruitful time for me"), so he decided to go into advertising. After being rejected by every advertising agency he applied to, he accepted a journalism position at The American Spectator and moved to Indiana. He subsequently wrote for Insight on the News, a conservative magazine owned by the Rev. Sun Myung Moon's Unification Church. In 1987, Gladwell began covering business and science for The Washington Post, where he worked until 1996. In a personal elucidation of the 10,000 hour rule he popularized in Outliers, Gladwell notes, "I was a basket case at the beginning, and I felt like an expert at the end. It took 10 years—exactly that long."

When Gladwell started at The New Yorker in 1996 he wanted to "mine current academic research for insights, theories, direction, or inspiration." His first assignment was to write a piece about fashion. Instead of writing about high-class fashion, Gladwell opted to write a piece about a man who manufactured T-shirts, saying "it was much more interesting to write a piece about someone who made a T-shirt for $8 than it was to write about a dress that costs $100,000. I mean, you or I could make a dress for $100,000, but to make a T-shirt for $8 – that's much tougher." Gladwell gained popularity with two New Yorker articles, both written in 1996: "The Tipping Point" and "The Coolhunt". These two pieces would become the basis for Gladwell's first book, The Tipping Point, for which he received a $1 million advance. He continues to write for The New Yorker. He also serves as a contributing editor for Grantland, a sports journalism website founded by ESPN's Bill Simmons.

In a July 2002 article in the The New Yorker Gladwell introduced the concept of "The Talent Myth" that companies and organizations, supposedly, incorrectly follow. This work examines different managerial and administrative techniques that companies, both winners and losers, have used. He states that the misconception seems to be that management and executives are all too ready to classify employees without ample performance records and thus makes hasty decisions. Many companies believe in disproportionately rewarding "stars" over other employees with bonuses and promotions. However with the quick rise of inexperienced workers with little in-depth performance review, promotions are often incorrectly made, putting employees into positions they should not have and keeping other more experienced employees from rising. He also points out that under this system, narcissistic personality types are more likely to climb the ladder, since they are more likely to take more credit for achievements and take less blame for failure. He states both that narcissists make the worst managers and that the system of rewarding "stars" eventually worsens a company's position. Gladwell states that the most successful long-term companies are those who reward experience above all else and require greater time for promotions.

Tipping Point author Malcolm Gladwell gets inside the food industry's pursuit of the perfect spaghetti sauce -- and makes a larger argument about the nature of choice and happiness.

Malcolm Gladwell: The unheard story of David and Goliath

It's a classic underdog tale: David, a young shepherd armed only with a sling, beats Goliath, the mighty warrior. The story has transcended its biblical origins to become a common shorthand for unlikely victory. But, asks Malcolm Gladwell, is that really what the David and Goliath story is about?